June 25th at 9am we began the swim portion of the first ever Lipedema Triathlon. The distance was 750M or 15 laps in the 25M pool of the Saratoga Springs YMCA. 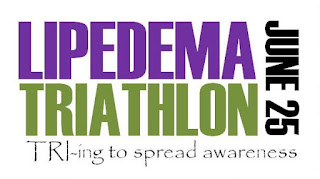 I learned the size of the pool is called a "short course" Olympic pool, which is recognized by FINA (the International Swimming Federation). Not that I thought I would be breaking any swimming records, but I love learning new things.

My coach/hubby, our daughter, our triathlon coach, our training mates, our friends and their significant others, and my best friend growing up, who drove from DC to NY the night before, all met up a little before the race began, and while I was anxious and nervous about what I had not only signed myself up for, but those that stood before me, it all fell away in that moment I saw them - I was blessed. I had all these people in my life that cared about me, that cared about this thing called Lipedema, and who fought just as hard as I to help spread awareness.

I was emotional in that moment, I am emotional here and now typing this, one month later, and it is the reason I didn't write about it sooner. How lucky am I.

Lucky, blessed, and oh so grateful & thankful for those I have standing with me, and those online from all over the world cheering us on as one of our friends shared videos of the ongoing race and read out the comments they typed - which really helped in those moments we needed them most, and brings tears to my eyes as I re-watch the footage now and hear those comments. 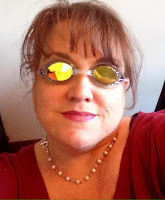 OK, enough emotion, lets dive into the recap (ha, see what I did there, "dive" into it). Sorry.

The swim caught me a little by surprise, I was surprised that while I thought my nerves had calmed down, my breathing did not agree. I couldn't seem to catch my breath (which breathing was the number one thing I was working on prior to the event, and is typically the thing most swimmers need to work on), and our twelve-year-old daughter swimming in the lane next to me began to have some issues once she reached the deep end of the pool. But our Aquatics Director, Ilene, came to the rescue and two pool noodles later our girl was swimming like a champ!

My coaches and friends on the shallow end reminding me to breathe, to slow down, and letting me know that the hour and thirty minutes I allotted for each event of the triathlon was going to be blown out of the water (oops, did it again, sorry, pun alert). 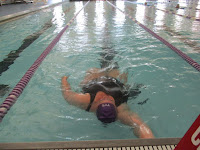 It turns out I completed the 15 laps in about 36 minutes, almost an hour quicker than I estimated. I would do the standard front crawl (or my best attempt at it) down and do a move called the penguin back (that the lovely Ilene told me about after a few laps - it is on your back and you reach above your head with both arms and scoop the water down towards your sides). In a triathlon you can do any stroke you like, you really are just trying to have fun, and save your energy for the rest of the race.

With Lipedema I have to wear compression most of the time, if I don't my legs fill up pretty quickly with lymph fluid, which is painful, and heavy, and tight; your legs feel really tight as the skin is stretched to the limits with the expanding fluid.

Imagine having water balloons all over your body, they move separately from the rest of you, and you feel the pull of them. That is what it feels like, like you are encased in big water balloons that move independently from you. You feel the gravitational pull all the time, but when you start moving and they go there own separate way, you really feel the heaviness of the lymph fluid trapped in your body.

Even with compression I get swelling, but it is a lot better than without, I could not have done the triathlon without compression. I wore bioflect micro massaging leggings in the pool. Wearing my bioflect compression in the pool is tricky, because it is not really made for the pool, but it worked really well.

Back to the race, I was now in the changing room trying to get the compression off (compression is not easy to get on and wet compression is even less fun to get off). It rolls and the pressure it puts on my legs as it rolls down really hurts. I took a quick shower to rinse off the chlorine, and then dried off really so I could put on more compression for the rest of the rest, all while my friends spun my suit out and tried to assist me as best they could (all this time in the changing rooms counts towards your final time - the transitions count).

Finally we made our way out to the stationary bikes, which the YMCA had reserved for us. Five bikes all in a row. Our daughter Noelle, our friend Phyllis, me, my bestie Bettina, and our friend Colleen all began the bike event (our friend and training mate Paul and our friend Joel took to the bike trail setup outside the YMCA directly following the pool, so were a good portion done before we began - see transition is so important, but so is compression when you live with Lipedema).

We felt great on the bikes, we were joking and having fun and shouting out the miles as we each reached them. I would have to stand up on the pedals occasionally as my feet (and my bum) would begin to go a bit numb. About an hour and 5 minutes later we would be done with the bike event - which was my biggest unknown going into the race. I had not been on a bike in over ten years, I was fearful my lipedema body would not fit, or the bike would not be able to support me, but it did, and I did, and it was great! 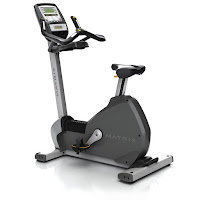 The one thing I learned, about a week prior to the race, is the bike I thought I wanted to use (the Sci Fit) did not work for me. Yes it fit my body, it has lots of adjustments for all body types, but the angle of the pedals (it is a recumbent style bike) hurt my knees, so I opted for the Matrix upright stationary bike and it was perfect - seat set at 10 worked best for me, but play around with your seat to make sure your in the right position.

On to the treadmill. At this point we were all still feeling good, smiles, laughing, incredibly proud for how far we had come already, and then the treadmill. Treadmills have a downside, they can be incredibly boring. My main reason for choosing it though was for the ability to hold on to something as my body tired.

I had been training three times a week for about 1.3 - 1.5 miles on the Matrix treadmill at the Wilton YMCA. It was the event I was most ready for, but just as my 1.5 miles cleared I knew I was in trouble. I had more than 1.5 miles still to go (the distance is a 5K) and I was done physically and emotionally. Or so I thought. A training mate popped in to support us and took one look at me and asked if a cold cloth would be good - YES, I said. She came back with two and I had her give my friend Phylise one as well. It was perfect! I placed it at the back of my neck and it gave me a little boost. I told everyone I had to buckle down, so no more talking for me, headphones on and searching for great songs to push me through to the end of this race.
That is when my iPod decided it had also had enough and kept trying to play a slow Tom Petty song. I love Tom, but this was a slow cool down tune, and I had more mileage to make before I was cooling down. I got a bit cranky at this point and then the treadmill said time to cool down and literally shut off!  WHAT??? I guess it is timed that way, to force you to cool down; it shuts off and I still had about a minute more time I needed. It was fixed, I have very patient friends who knew to put their ear muffs on, and then, we were finally finished!

We were officially LIPEDEMA TRIATHLON FINISHERS!
Posted by DreamWeaver at 11:29 AM No comments: