June 16th at 9am we began the swim portion of the Third Annual Lipedema Triathlon. The distance was 750M or 15 laps in the 25M pool of the Saratoga Regional YMCA.

This year I had not done much swimming prior to the Triathlon, like I had last year, and I knew I had to pace myself or the excitement of the race would throw my swim off, which can really set you up for an even tougher Tri.

Even without much prior swimming, my time this year was only a few seconds slower than last year, I clocked in at 27:30, and was pretty excited I was only a little over my PR from 2017. 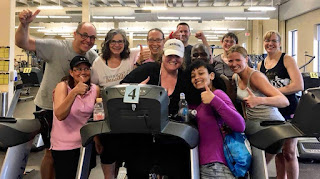 
THANK YOU!!! I could not do this every year without my coach and husband, our daughter, our training mates, and our family and friends.

SPECIAL THANK YOUS!!! Saratoga Regional YMCA Aquatics Director, Ilene, and staff members Genevieve and Shannon were such great supporters, cheering us on and tracking our progress every step of the way - a huge shout out to them and to the members of the YMCA, who happened to be sharing the space with us as we shouted out mile after mile.

The thing that stuck out for me this year, is how many first time triathletes we have. Most told me they would never have even attempted a triathlon if it were not for the Lipedema Triathlon I created just 3 years ago. To think back to where I was before I started this Lipedema Fitness journey (barely being able to stand, let alone walk) to being a 3 X Triathlon Finisher just blows my mind. I am incredibly grateful my legs have carried me so far. Small steps equal mountains climbed! Never give up. 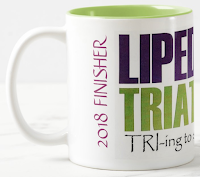