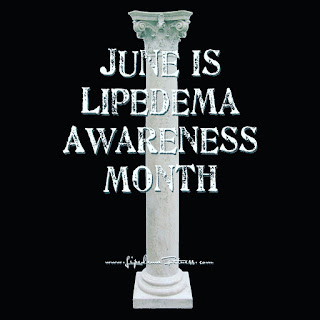 The shape change of my legs, after the C section of my daughter in 2004, was what sealed it for me, that there was something different, something was going on with my body.

I had always had less shapely legs growing up, but after the surgery my lower legs became more column-like, and the ankle cuff more pronounced.

Sadly it would take me a lot of effort, and 3 years to finally get a diagnosis and understand what was going on with my legs.

It shouldn’t take so long. If I could have been diagnosed at an earlier stage it would have been much better, treatments would have worked better, and I would most likely have avoided the additional Lymphedema diagnosis, and symptoms.

Spreading awareness is key. Patients have lead the way to better understanding, and social media plays a big role in our ability to do so.

Posted by LipedemaFitness at 9:11 AM
Email ThisBlogThis!Share to TwitterShare to FacebookShare to Pinterest